I recently worked on a python project and noticed a situation where I needed two dictionaries to be merged recursively. There were some easy and simple solutions, but they would not have expected results or the dictionaries were not merged recursively or merged dicts would not properly override values. So I thought to write one myself. Here I’ll demonstrate how to combine two python dictionaries where merged dict will have corresponding values from both first and second dicts with second having precedence over the first. 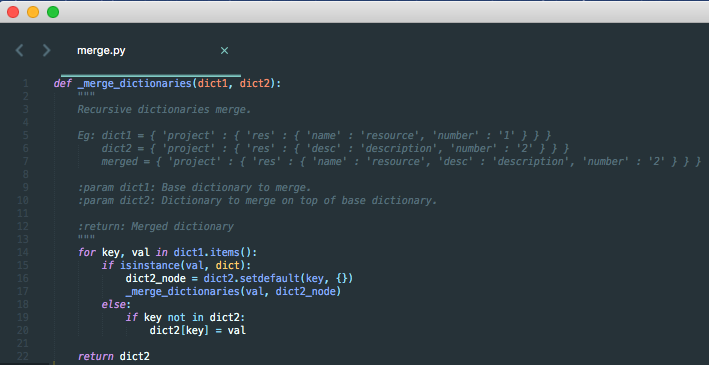 Following code can be used to recursively merge two dicts.

Thats working code! But I also want to show here what didn’t work for me. I initially tried with `dict.update` and spread operators. Bot both of them failed to update the dicts recursively.

Karthik Bhat is a Software Engineer at News Technolgy Services India Private Limited. He started his career by building an e-commerce business for Mangalore. After running the business for 3 years he moved to Bangalore. In Bangalore, Karthik started working in a startup and gained knowledge of the Software industry. Now he is working as a Lead Engineer and handles a Software team of eleven members. His expertise includes technologies ranging from Docker, Python, Containerization, Product orchestration, WordPress, Drupal, Javascript, ReactJS, VueJS, NodeJS, Cloud services like AWS, Google and many more latest and trending stacks. He shares his knowledge via the blog website maintained with URL karthikbhat.net. Karthik mainly writes content on the topics which he comes across in his day to day IT life. Topics include Software development technics and best practices, coding snippets, blogging, Natural health tips and tricks, and some other General Knowledge stuff. So.. Enjoy reading those articles!
Learn More
Sending download link ...
+